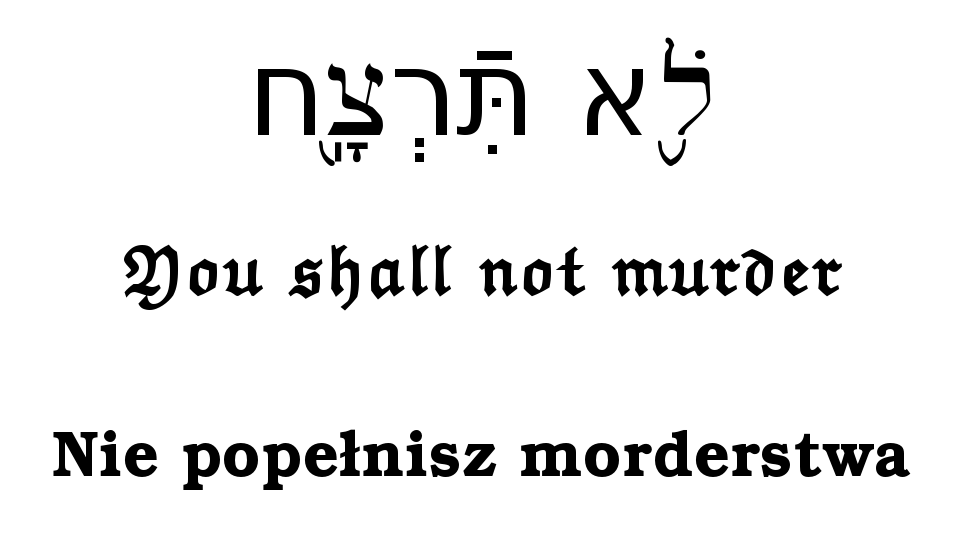 The Book of the Law Repeated Again

You shall love the murderer more than the victim. For God is the Lord of life and the murderer is alive, and the victim has been killed by God's will.

Come out of her, my people, that you have no participation in her sins, and that you don’t receive of her plagues, for her sins have reached to the sky, and God has remembered her iniquities.
Rev 18:4-5

Whoever sheds man’s blood, his blood will be shed by man, for God made man in his own image.
Gen 9:6

If a man schemes and comes presumptuously on his neighbor to kill him, you shall take him from my altar, that he may die.
Exod 21:14

Moreover you shall take no ransom for the life of a murderer who is guilty of death. He shall surely be put to death. You shall take no ransom for him who has fled to his city of refuge, that he may come again to dwell in the land before the death of the priest. So you shall not pollute the land where you live; for blood pollutes the land. No atonement can be made for the land, for the blood that is shed in it, but by the blood of him who shed it.
Num 35:31-33

But if any man hates his neighbor, lies in wait for him, rises up against him, strikes him mortally so that he dies, and he flees into one of these cities; then the elders of his city shall send and bring him there, and deliver him into the hand of the avenger of blood, that he may die. Your eye shall not pity him, but you shall purge the innocent blood from Israel that it may go well with you.
Deut 19:11-13

For rulers are not a terror to the good work, but to the evil. Do you desire to have no fear of the authority? Do that which is good, and you will have praise from the authority, for he is a servant of God to you for good. But if you do that which is evil, be afraid, for he doesn’t bear the sword in vain; for he is a servant of God, an avenger for wrath to him who does evil.
Rom 13:3-4

For God commanded, ‘Honor your father and your mother,’ and, ‘He who speaks evil of father or mother, let him be put to death.’ But you say, ‘Whoever may tell his father or his mother, “Whatever help you might otherwise have gotten from me is a gift devoted to God,” 6  he shall not honor his father or mother.’ You have made the commandment of God void because of your tradition.
Matt 15:4-6

A man planted a vineyard, put a hedge around it, dug a pit for the wine press, built a tower, rented it out to a farmer, and went into another country. When it was time, he sent a servant to the farmer to get from the farmer his share of the fruit of the vineyard. They took him, beat him, and sent him away empty. Again, he sent another servant to them; and they threw stones at him, wounded him in the head, and sent him away shamefully treated. Again he sent another; and they killed him; and many others, beating some, and killing some. Therefore still having one, his beloved son, he sent him last to them, saying, ‘They will respect my son.’ But those farmers said among themselves, ‘This is the heir. Come, let’s kill him, and the inheritance will be ours.’ They took him, killed him, and cast him out of the vineyard. What therefore will the lord of the vineyard do? He will come and destroy the farmers, and will give the vineyard to others.
Mark 12:1-9

Don’t think that I came to destroy the law or the prophets. I didn’t come to destroy, but to fulfill. For most certainly, I tell you, until heaven and earth pass away, not even one smallest letter or one tiny pen stroke shall in any way pass away from the law, until all things are accomplished. Whoever, therefore, shall break one of these least commandments, and teach others to do so, shall be called least in the Kingdom of Heaven;
Matt 5:17-19

Not everyone who says to me, ‘Lord, Lord,’ will enter into the Kingdom of Heaven, but he who does the will of my Father who is in heaven.
Matt 7:21

For whoever does the will of my Father who is in heaven, he is my brother, and sister, and mother.
Matt 12:50

But a certain man named Ananias, with Sapphira, his wife, sold a possession, and kept back part of the price, his wife also being aware of it, then brought a certain part and laid it at the apostles’ feet. But Peter said, “Ananias, why has Satan filled your heart to lie to the Holy Spirit and to keep back part of the price of the land? While you kept it, didn’t it remain your own? After it was sold, wasn’t it in your power? How is it that you have conceived this thing in your heart? You haven’t lied to men, but to God.” Ananias, hearing these words, fell down and died. Great fear came on all who heard these things. The young men arose and wrapped him up, and they carried him out and buried him. About three hours later, his wife, not knowing what had happened, came in. Peter answered her, “Tell me whether you sold the land for so much.” She said, “Yes, for so much.” But Peter asked her, “How is it that you have agreed together to tempt the Spirit of the Lord? Behold, the feet of those who have buried your husband are at the door, and they will carry you out.” She fell down immediately at his feet and died. The young men came in and found her dead, and they carried her out and buried her by her husband.
Acts 5:1-10

After three days Paul called together those who were the leaders of the Jews. When they had come together, he said to them, “I, brothers, though I had done nothing against the people or the customs of our fathers, still was delivered prisoner from Jerusalem into the hands of the Romans, who, when they had examined me, desired to set me free, because there was no cause of death in me.
Acts 28:17-18